In railway parlance, a window is referred to as a "light". 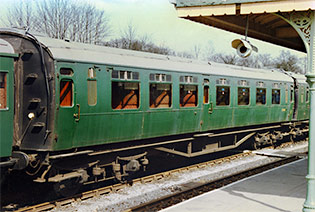 Drawings are available as "Gif"s for viewing on your browser, and in "pdf" form for higher quality. They are drawn at a scale of 3.5mm to the inch. Thus for 7mm/ft modelling, they are scaled up by a factor of 6, and for 4mm/ft, by a factor of 10.5. The scaling of the gifs is for 72 dpi.

The potential modeller of any Bulleid coach is commended to David Gould's Oakwood Press book, Bulleid's SR Steam Passenger Stock, in either of its two editions.

This should enable you avoid what one of my Bluebell colleagues saw for sale for several hundred pounds: a beautiful "O" gauge model of an early (i.e. very different body style, door to each compartment) Bulleid coach numbered as 4279, which is a very different coach indeed!

This style of sidelight was used for the Southern Railway 64'6" stock dating from December 1946 to May 1948. For photos of coaches with this type of Ventilator, see:
Bluebell Railway coaches: 1456 and 5768.

The sliding lights on these are described as having a 10 1/4 inch opening as compared to the 15 inch opening on the later vehicles. Until such time as I can measure one of this type, it is reasonable to assume that the drawing will be very similar, but with the main light having a depth about 5 inches greater, and the sliding lights 5 inches less.

These carriages were built by Birmingham Railway Carriage & Wagon Co. between December 1947 and April 1949. The sidelights were of completely different design, having more in common with the last of the pre-war Maunsell stock than the contemporary Bulleid stock built by the Southern Railway itself. Whereas the Railway-built stock had the main side-lights in a pressed steel frame, flush with the body-side panelling, and separate brass or aluminium frames for the sliding ventilators fitted from the inside, the contractor built coaches had externally fitted aluminium frames incorporating both the main light and the sliding lights. The total size of the window is significantly smaller than for the Railway-built coaches, not being nearly as deep.

Note that the side-lights on the corridor side do not have the sliding vent frames, being just a single large sheet of glass in a rectangular aluminium frame.

This drawing was made from measurements taken from Bulleid Brake Third No.4279 at Horsted Keynes on 18 December 1999.

Back to my SEmG Page
or the SEmG Home Page.